Steve Jobs autographed Apple II manual up for auction for $787,483

A manual for the Apple II PC, signed by Steve Jobs and former Apple CEO Mike Markkula, has been auctioned for nearly $790,000. The manual includes a personal message from Jobs to the addressee, Julian Brewer.

The steel-ring bound manual was auctioned by RR Auction. After 46 bids, the property was eventually sold to Indianapolis Colts owner Jim Irsay for $787,484. The Apple II manual was signed in 1980 when Jobs and Markkula stopped by Mike Brewer’s home. Brewer had arranged Apple’s distribution rights in the United Kingdom. Brewer called his son, Julian, down. The teen took his Apple II manual to get signed. Jobs wrote the following message in the document:

“Julian, your generation is the first to grow up with computers. Change the world!
Steve Jobs, 1980.”

The object is part of a series of Apple-related items, including an Apple I PC, a letter signed by Jobs and the leather jacket Jobs wore in 1983 in the iconic “middle finger to IBM” photo. The manual has been auctioned for the highest amount by far. 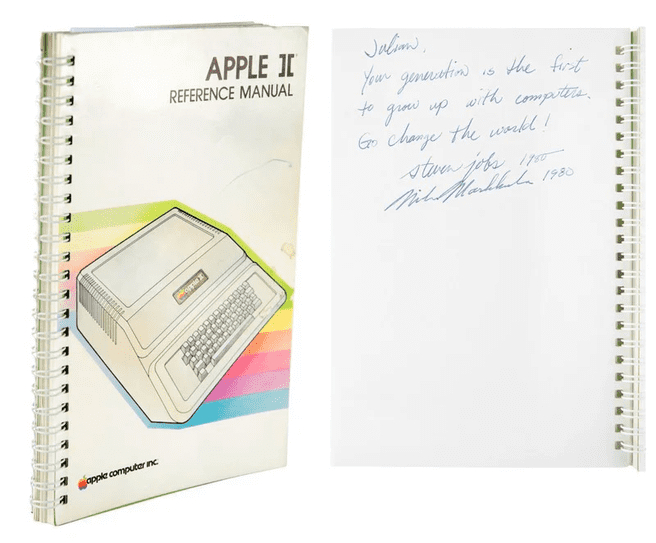