Last Friday, the newly designed iPad Air went on presale from Apple, along with the new iPhone 12 and iPhone 12 Pro. That was quite a surprise, because until then all we knew was that the iPad Air 2020 would be released “sometime in October.” It didn’t get any more concrete than that. We now have the iPad Air at home for a number of days to try out. What’s good about this iPad? What could be better? We are happy to share our first impression with you!

What is striking about the iPad Air 2020?

When the iPad Air was presented on September 15, the design was the first thing that caught your eye. Do you have an old iPad Air? You no longer recognize the new one, it does not resemble its predecessors at all. For the iPad Air new style, Apple has used the futuristic design of the much more expensive iPad Pro. That is to say: a screen with rounded corners, a narrow border around it, no home button. The sides are flat, just like the latest iPhones. What a metamorphosis!

With a soft pop, the lid comes off the box. The silver iPad Air that emerges is indeed very reminiscent of an iPad Pro. This Air has exactly the same dimensions as the smaller of the two iPad Pro models: the 11-inch iPad Pro. The screen is a bit smaller at 10.9 inches, the border around it a bit wider, but to be honest it is hardly visible. What is striking, however, is that the iPad Air is available in a whole range of sparkling colors: in addition to the calibrated silver and space gray, there is also rose gold (read: pink), sky blue and green. 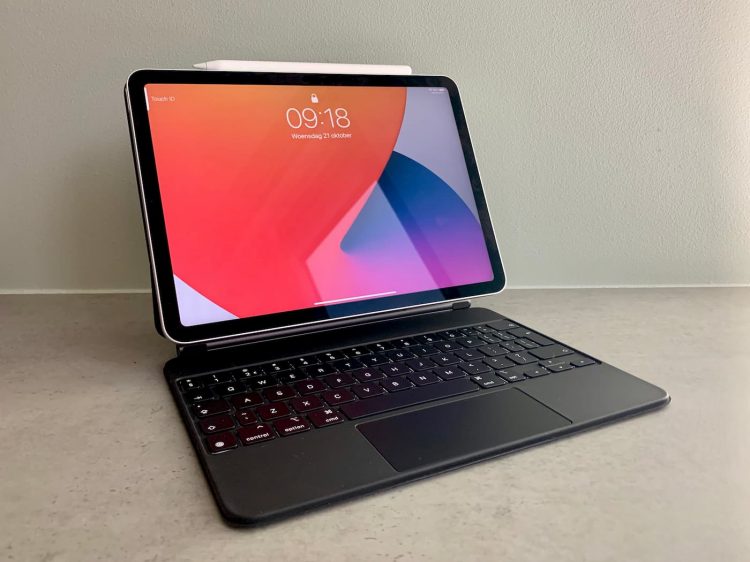 The iPad Air not only resembles the iPad Pro in appearance. It has also taken over exactly its most popular functions. For example, the iPad Air now also has a USB-C connection instead of a Lightning port, making it easier to connect external equipment. The Air now also has the same 12 ‑ MP wide-angle camera of the Pro (but the Pro does have an extra lens, an ultra-wide angle).

And then the accessories: it works with the second generation Apple Pencil. It is easier to connect, charge and store than the first Pencil, and it also has no annoying loose parts such as caps and adapters. The Magic Keyboard also works with this Air and is therefore no longer exclusive to the Pro. The built-in trackpad really feels like an alternative to a MacBook.

Are all innovations really borrowed from the iPad Pro? No. The iPad Air also has a number of real novelties. For example, the Air does not have a home button, but still always has Touch ID. The fingerprint scanner is incorporated for the first time in the button at the top right of the tablet – something you are so used to, by the way. I ask my left-handed colleague whether the position of the button is not an obstacle, but no: as a left-handed person you will be faced with hotter fires.

Finally, the iPad Air has an A14 Bionic chip which is newer than the iPad Pro’s A12Z Bionic chip. Newer is not necessarily better or faster. Briefly, the cores in the A14 chip of the Air separately are better. But the A12Z of the iPad Pro has more cores. Depending on the task, sometimes the A12Z performs better, the other times the A14. But both chips are lightning fast.

What could be better?

The iPad Air lacks certain features of the Pro. For example, the Air does not have a LiDAR scanner, not a double but a single camera and the screen has a lower refresh rate. But yes: if you are passionate about things like that, you might be a real power user and the iPad Pro is a better choice anyway. As far as we are concerned, the Air has taken over exactly the right functions from the Pro. If you still have doubts, read “Why should you buy an iPad Pro now” in our buying advice section.

Furthermore, the iPad Air comes into its own best in combination with the Apple Pencil and the Magic Keyboard. I’ve been using the iPad Air as a replacement for my MacBook for days and hardly ever touch the screen. Completely perfect! But… you still have to purchase those accessories separately and cost € 135 and € 339 respectively. Together that is already more expensive than a “normal” iPad. Of course you don’t have to buy these accessories, but you do want to. Because it really has added value. It would have been nice if an all-in-one bundle was available at a discount.

The iPad Air is for the more advanced user. This tablet is very close to the iPad Pro in many areas, but for hundreds of euros less. Apple has selected the most popular Pro features – design, super-fast chip & accessories – and brought them to the Air. The really technical bells and whistles are missing, but they are mainly interesting for power users, and we like to refer to the iPad Pro. The Air is perfect as it is.

When can you buy it?

The iPad Air went on presale last Friday, it will be in stores next Friday, October 23. The prices depend on two things: 1) how much storage do you want? 2) do you want a version with or without mobile internet? These are the prices:

You buy the iPad Air from Apple or at stores like Coolblue.